Eager for new adventures in Emigrant Wilderness, I first drove south to Sunnyvale the morning of July 29th. A few days before I had ordered some decent Tenkara fishing gear and it was waiting for me in the post office there.

My new fancy Japanese rod in my possession (a Daiwa Kiyose 33SF in case you’re wondering), I made my way towards Stanislaus National Forest. Because there’s bears there, you need some bear-proof method of storing your food and toiletries. The lightest option is bear-hanging everything, but finding an appropriate branch had taken so long last time I did and I wasn’t really looking forward to doing that every day. The heavyweight but simple option is of course to carry a bear cannister. Luckily, there’s a nice middle-of-the-road solution as well: the Ursack, a Kevlar bear-proof sack that you don’t have to hang. It is (should be?) accepted in all parks except for Yosemite, Sequoia and King’s Canyon NP. Perfect! A store in a town called Arnold sold them, so I headed there first and then picked up my wilderness permit along the way to the trailhead. Having stocked up on some food, I was ready for the adventure to begin!

And begin it did! In fact, it did even before I arrived at the trailhead. While checking out some flyers at the ranger station, a lady who clearly hadn’t seen me arrive backed up into my car. Much creaking of metal was heard by all! Luckily the damage wasn’t too bad and the car still drove without a problem. We filled in a report form and that was that. Adventure!

The car got into a little accident. It kind of looks worse in real life.

The little fender bender incident had made me lose quite some time and it was way past sunset when I finally arrived at the Crabtree trailhead. Unwilling to head out into the darkness to find the unmarked campsite nearby, I put up my hammock on the parking lot. Veronique had unkowningly brought it with her and I decided to test just how much more comfortable it would be compared to sleeping in the bivy.

The next morning I headed to Grouse Lake, about 2 hours from the trailhead. On the topo I had spotted several creeks along the way, but due to the ongoing drought the past four years, all but one of them had completely dried up. Unlike in the awesome creeks in the High Sierra, I wouldn’t be doing any trout fishing in these. Also due to the drought and compounded by a handfull of fires, a huge amount of trees on the way in were dead. It was a rather strange sight to see a whole valley full of dead, whitered pine trees.

A beautiful sky and Sierra hills. Bring on the hiking!

Dead, whitered pines on the way in to Grouse Lake.

One of the reasons I was heading into the wilderness was doing some fishing, which I hadn’t really been able to do on the JMT. Arriving at Grouse Lake, it seemed the whole shoreline was covered in water lotuses, so I got a little concerned. Luckily there was one small stretch with access to the water and there I set up my hammock and tarp. Not five minutes later a thunderstorm popped up out of seemingly nowhere. 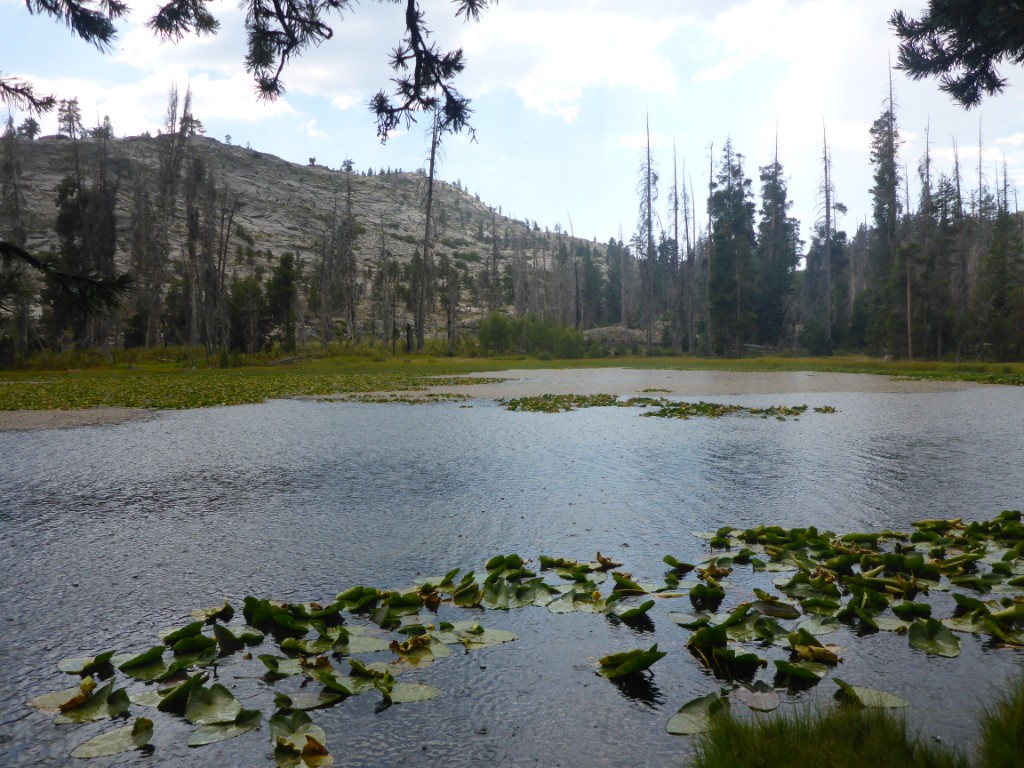 The hammock setup ready for the thunderstorm.

The tarp did a great job though, I lounged in the hammock and soon the thunderstorm moved away. Over the course of the day, and the next day as well, it would continue raining for a couple of minutes every few hours. But the sun always broke through and dried everything in an instant. And it made for a couple of nice rainbows as well! 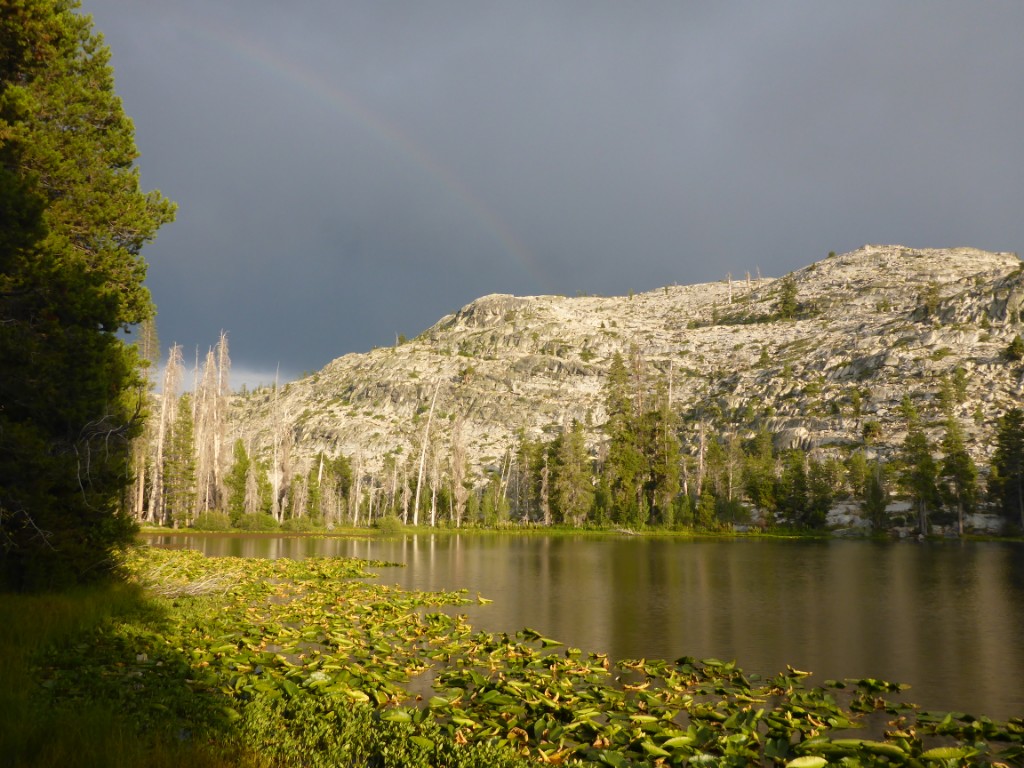 The rain and sunny skies made for some nice looking rainbows over the lake.

Tons of trout were jumping out of the water, but unfortunately all were way out of reach of my fly rod. It was kind of frustrating seeing them leap out but not being able to reach them. Luckily, I had books to read and movies to watch and so I spend a very relaxed day in the hammock.

Some guy I had spoken for about 15 seconds with handed me this card. Cool! I'm curious! 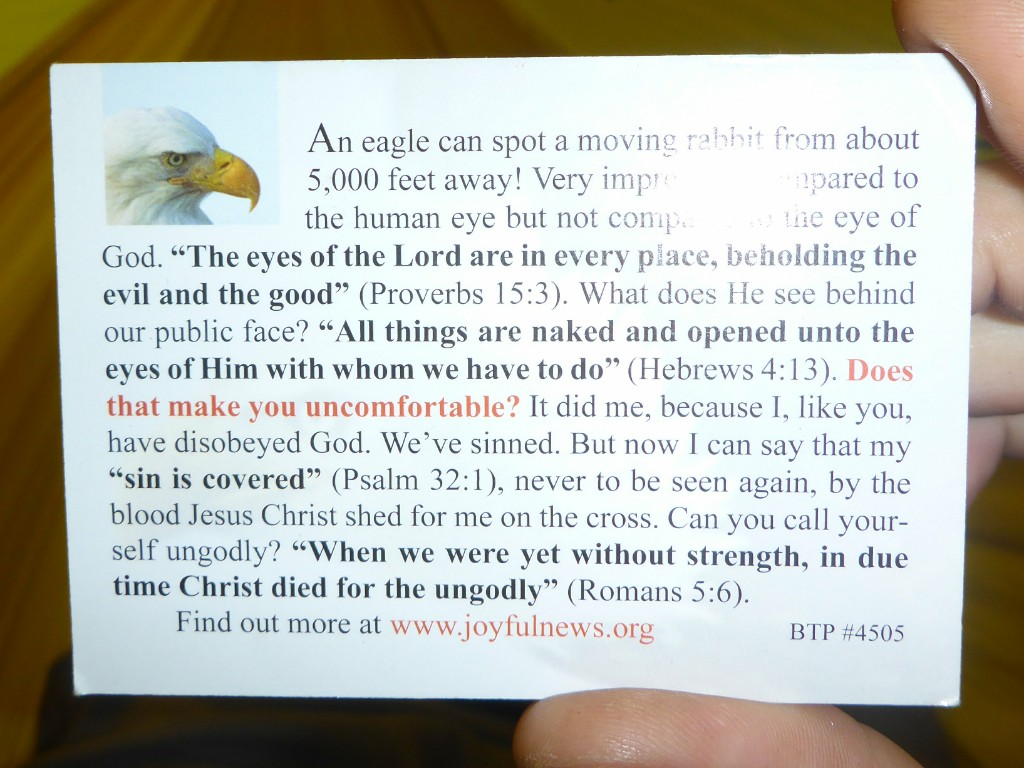 Seriously? Are you kidding me, random guy? This is what you hand out to strangers...?

The next day, I tried my hand at tying a couple of flies. They look pretty bad and probably won’t catch a fish anytime soon, but in my defense they were the first flies I’ve ever tied and I was lying in the hammock while doing so. Still, it was a lot of fun making them.

Fly abominations tied lying in the hammock. I wonder what fish would go for these.

In the afternoon, I met two super nice people, Jackson and his young son Brock who where out with their scouts troop for a couple of days. Jackson is the general manager at Bass Pro shops in nearby Manteca and thus a huge fishing fanatic. We spend much of the afternoon angling together and eventually managed to land a decently sized brook trout. He made for a great addition to my dinner!

The brook trout Jackson & me caught.

Jackson had spend many nights in Emigrant Wilderness and told me the place to be for fishing was Deer Lake, about 15 kilometers further up. And so the next morning, after catching and gutting a trout for Jackson and Brock, I headed that way. Compared to the JMT the trail was easy, the uphill switchbacks were almost flat and steeper sections never lasted very long. Less than three hours later, after passing a handful of other nice lakes, I was at the promised fishing land. 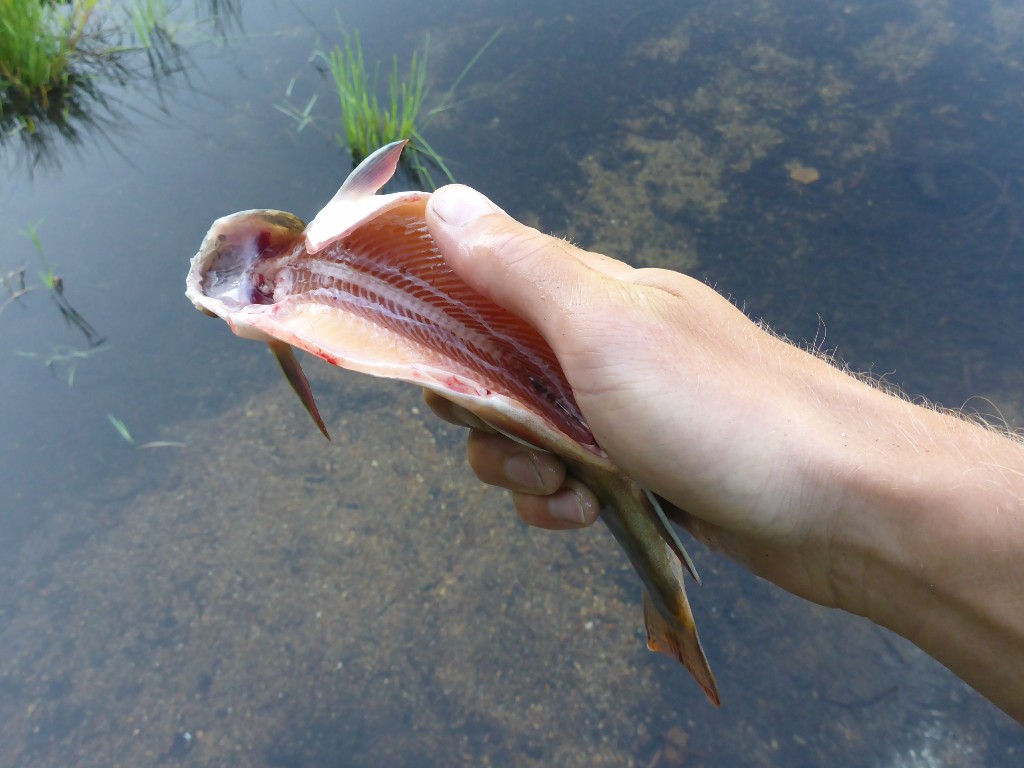 Another brook trout, this one was for Jackson & Brock to enjoy.

Hiking around the lake, I eventually stumbled upon the perfect camping spot. It was close to the water, yet completely shielded from prying eyes by a bunch of big rocks. Best of all there were a bunch of trees that provided shade during the day and that my hammock fit just in between. It also had great views over the lake, which was really beautiful, much more so than Grouse Lake.

Camping with the hammock was fantastic by the way. Whereas I would wake maybe 5-6 times a night in the bivy, I only did so once a night in the hammock. I also didn’t have to worry about getting wet, since the tarp stopped at the rain and I was hanging safe and sound above any wet ground. Great success!

That day and the next one I spend fishing and writing blog posts, dozing in the hammock and reading books on my Kindle. Super relaxing! Fishing in Deer Lake was way better than in Grouse Lake. Even though I only managed to hook four fish, and three of those managed to get away, it was great fun fighting them once they went for the fly. A good thing that Jackson had given me a couple of flies, because the trout didn’t seem to be interested in the fly patterns I had brought. 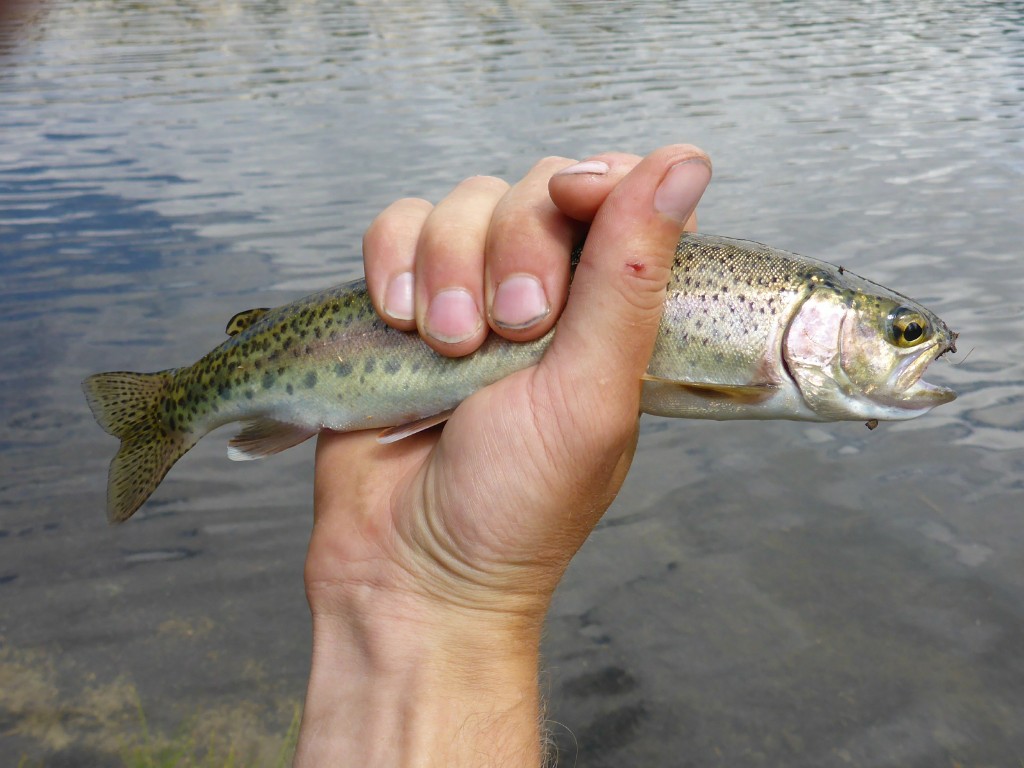 First (and only) fish I managed to land with my new rod at Deer Lake, a nice rainbow trout.

I didn't feel like having fish, so back in the water the little fellow went.

This was dinner instead: mushrooms, creamy mushroom-sauce pasta and delicious bacon jerky. Hmm!

It was crazy how many trout were jumping out of the water at sunset. One certain spot in the middle of the lake had more than five of them leaping out every second for a good thirty minutes!

Deer Lake at sunset. Trout were leaping out of the water everywhere.

My fifth day in Emigrant Wilderness, August 3rd, I headed back in the direction of the trailhead. Jackson had told me that Bear Lake was also good for fishing and so that’s were I was headed. In the end, I didn’t even try fishing there, because I wasn’t up for wading in through a bunch of reed to get to where the fish were supposed to be. Still, it was a nice place and I had another relaxing day in the hammock.

The creek flowing (or in this case not quite flowing) out of Deer Lake.

Pretty lilies on the trail.

A view across Bear Lake from near my campsite.

Since I had run out of food, there was no alternative but to head back to the trailhead the next morning. With only about 6 kilometers to go, I quickly made it back and was soon gorging on a bunch of food I still had in the car.

My wilderness permit allowed me to stay a total of twelve days in Emigrant Wilderness, but I had a couple of things on my todo list and so decided to head back in the direction of the Bay Area. Along the way, I dropped by Bass Prop shops to say hi to Jackson, but he wasn’t in. Maybe next time!