Having checked off the things I wanted to see in the Outback, I headed back to Katherine, up north.

But before I write about that part of the trip, let me show you one last picture of the West MacDonnell range that I  found on my cellphone. No filters or photo manipulation of any kind :)! If this doesn’t convince you to go check it out, I don’t know what will.

Who needs Photoshop when there's the West MacDonnell mountains?

Anyway, back to my trip. The morning of May 3rd, I walked a very short  (500m?) trail in the Devils Marbles. This seemed to be the only trail there, but then again the area is rather small to begin with. There were quite a few interesting boulders, many of them split due to water expanding in tiny cracks within.

Many of the boulders at the Devils Marbles are split like this one.

The remainder of the day was rather uneventful, although I did treat myself to my first Australian meal not cooked by myself: a humongous hamburger :). I spend the night near Matarkana, where I had dropped off Kirsten the week before.

The next morning I visited the Matarkana hot springs. Having a swim in the crystal clear water in the middle of nature was super refreshing. On the way back to my car, I encountered a wallaby that wasn’t afraid at all, which was super cool. Naturally, a photo shoot with my new best friend was in order :). Besides the wallaby, I also spotted a couple of intensely colored orange-green-blue parakeet, but they weren’t as keen to hang out.

My new best friend, Wally, checking out the hot springs.

Oh, how we laughed!

Afterwards, I drove to Katherine, did some grocery shopping, and then decided to set up camp early near Katherine Gorge NP. This was a welcome change from the last 11 days, when I always drove until near sundown. I was rewarded for my decision by a couple of campers who gave me some delicious homemade cake.

The view from my camping spot: rolling grassy hills in every direction.

Early next morning, the 66th day of my trip, I drove down to the park and had breakfast surrounded by hundreds of flying foxes. Most of them where sleeping, but a couple were keeping a close eye on me while a few others were making a horrendous ruckus and beating one another in order to get a better sleeping spot. 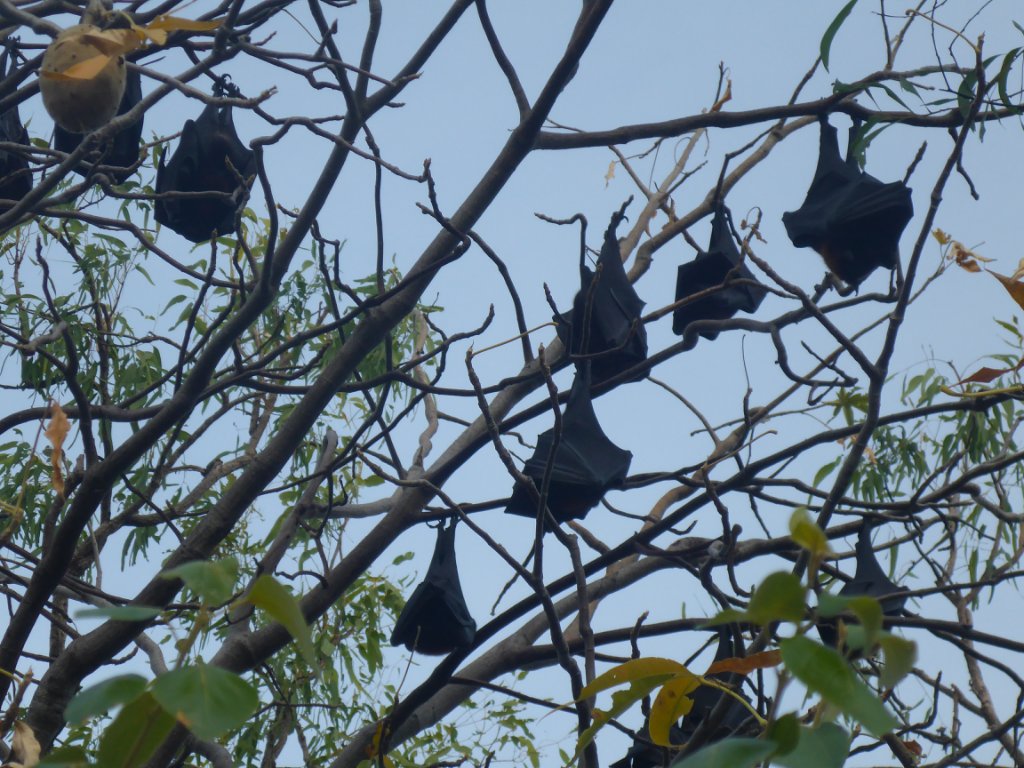 Hundreds of flying foxes sleeping in the trees at Katherine Gorge NP.

I sampled some of what the park had to offer by hiking a short 3.4km up to a lookout point. It was pretty nice, but couldn’t really compare to the sights I had seen the days before. I guess I’m spoiled :). There were some beautiful animals here as well, such as flocks of green-red-blue parrots flying around. 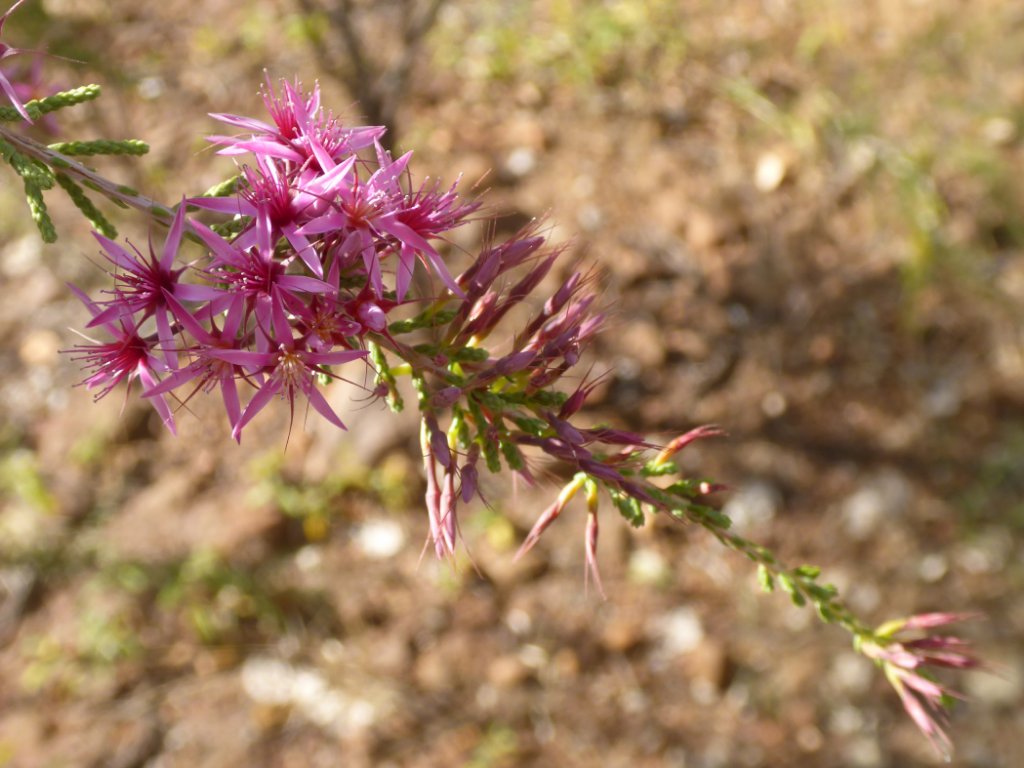 This butterfly was feeding and didn't seem to be bothered by me.

Instead of spending the remainder of my day hiking in the park, I decided to start heading westwards. My destination is Broome, from where I will continue my journey to the south. But, since that’s almost 1000km from Katherine, I’ll be visiting some other things along the way. For example, I had my lunch on a hilltop overlooking beautiful lush green valleys and reddish mountain plateaus. One could do worse :). 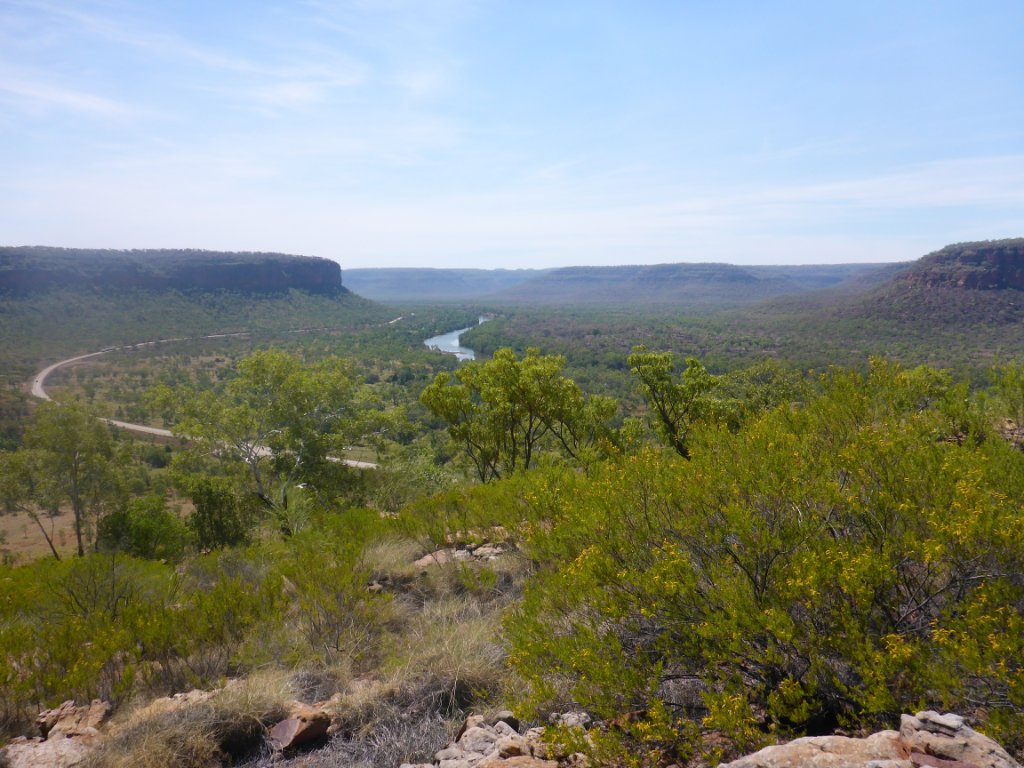 The Gregory tree: a big boab where a famous expeditioner set up camp.