June 6th, seated next to the “Midnight Lightning” boulder in Camp 4, checking my mails, I noticed a familiar face walk past. Familiar might be a bit of a stretch, but I felt I definitely knew this girl from somewhere.

Turns out I was correct! Cat, a Belgian girl whose blog inspired me to have a go at the JMT, was back in the States to hike the Pacific Crest Trail with her boyfriend HQ. What a small world :)! They were taking a couple of rest days away from the hiking crowd, getting immersed in all the climbing talk around Camp 4. We discussed gear, they talked about their adventures on the trail, and in the evening we had a nice meal together.

The three of us even considered heading up Snake Dike (a route on Half Dome) two days later, but in the end that plan fell through because Cat had a stress fracture in her foot from walking over 1200 km in 45 days. Understandably she wanted to let her foot rest for a bit, instead of hiking one of the most strenous trails in the Valley and climbing 400 meters.

Cat & HQ came over to say bye before continuing their PCT hike.

During the day, it basically kept on raining, so no chance to go climbing with Beat. Instead, I had a couple of beers with my campground neighbors from San Diego. All in all, a very relaxing rest day.

The weather forecast for the next day was great though, so Beat and I got up early to go give Nutcracker another go. Unfortunately, there was one little problem: we didn’t have enough gear. Asking around Camp 4 got us nowhere, since everyone was preparing to go climb and thus no one could afford to let us borrow gear. Luckily, a friendly guy at the search and rescue camp behind Camp 4 came to our aid, and off we went.

This was my third time up Nutcracker that week, and it was indeed the charm: not a drop of rain! We did have a bit of an adventure going up though. I was convinced it was only 4 pitches and neither me nor Beat bothered to check the topo. So, after pitch 3 Beat went up to lead the “final” pitch, only to come to the conclussion that he didn’t have enough gear to protect the route. Fine, I lower him down a little, he back cleans some of the gear and up he goes again. Only then did I learn from another climber that there are in fact 5 pitches… Meanwhile, Beat is almost 60 meters above me, it’s nearly impossible to understand one another, and the amount of rope left is getting shorter by the minute. At this point, I’m getting a bit worried, because he might get stuck up there with no gear and no way to build an anchor. In the end, with 30 cm of rope left, Beat managed to make his way to a tree and belay off of it. Our 5th pitch was a very short 15 meters :). Success! 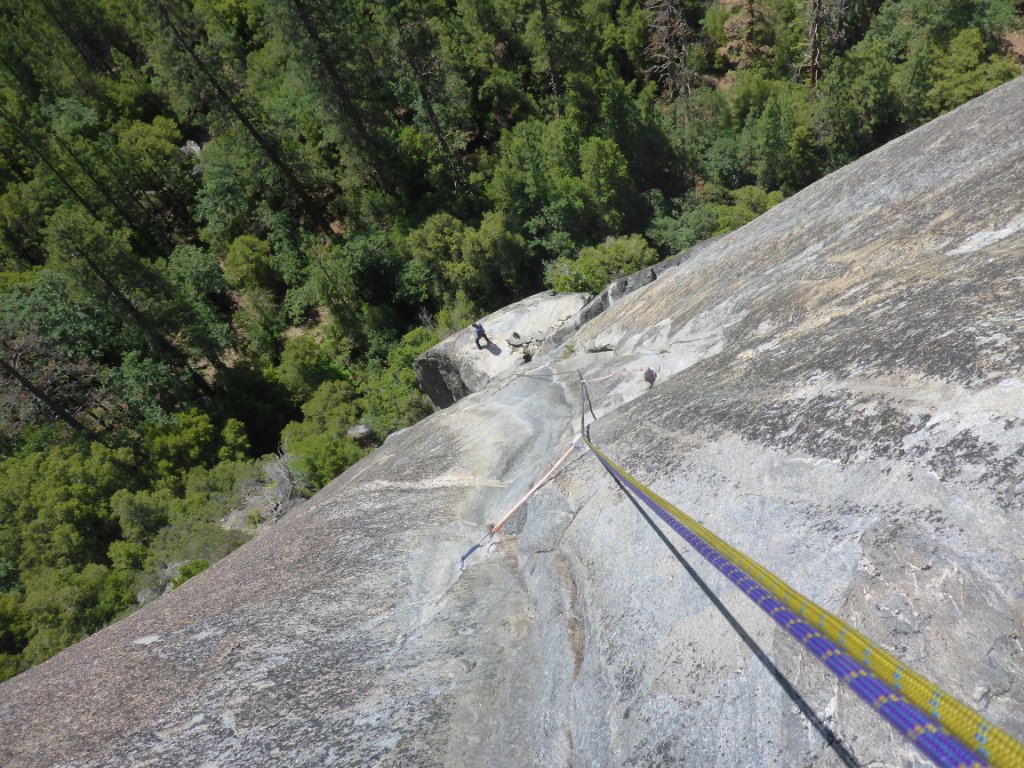 At the belay on the 3rd pitch of Nutcracker, Beat readying to come up.

Third time's the charm! Beat and me finally made it to the top of Nutcracker, no rain this time.

In the evening, Cat, HQ, Beat and I drove up to Tunnel View to take some pictures of El Cap and Half Dome at sunset. Lots of people there, in particular a ton of Japanese taking pictures of themself taking pictures… Got to put that second DSLR you haul around to good use :p.

Sunset over Half Dome, El Cap is front left.

Beat left the next morning, day 100 of my trip. I spend most of the day modifying my planning for the JMT, so that I will be able to depart at the actual starting point at Happy Isles in the Valley, instead of at Tuolumne. By 4PM, I was finished and deciding that I needed a little more excercise than sitting on my ass all day, I headed up the Four Mile Trail, which winds from down in the Valley up to Glacier Point. It’s a pretty steep hike, almost 1 km of elevation over 7.5 km of trail (jup, not 4 miles, I was a bit disappointed when that became apparent on the way up). Good practice for the JMT! I made it up there in about 2h 20min and the trip down took only half of that. Trekking poles definitely helped a lot and took a noticable load off my knees, which is a good thing, because I tweaked my left meniscus about a year ago while climbing. 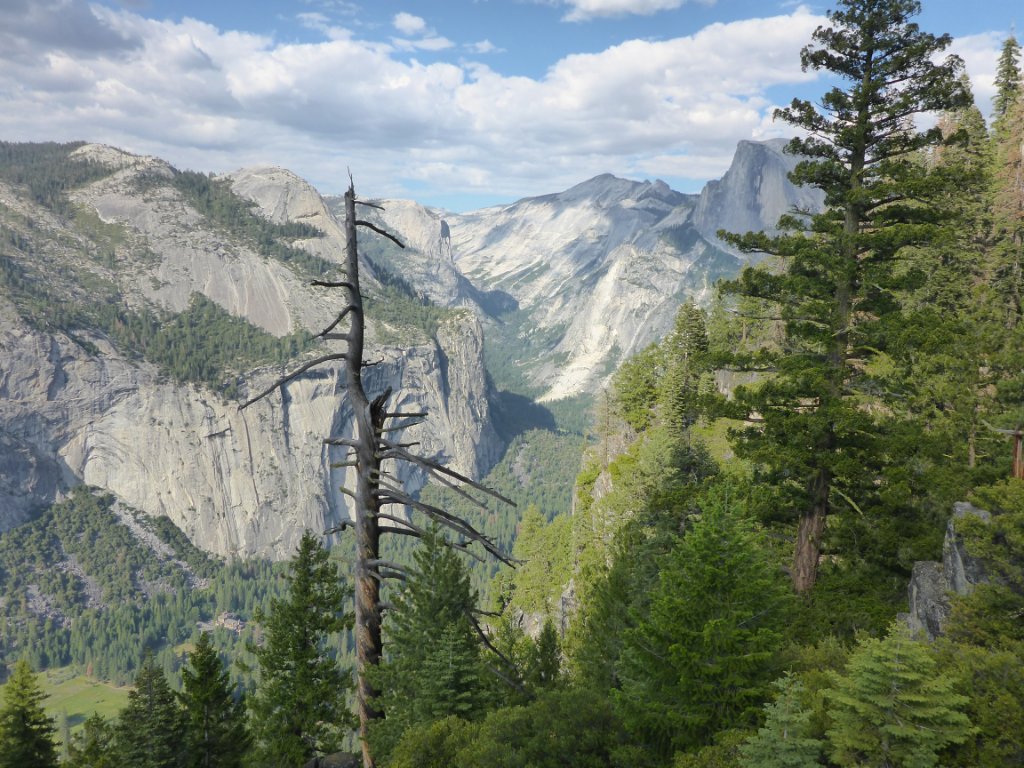 Somewhere on the Four Mile Trail: North Dome on the left, Royal Arches behind the dead tree, and Half Dome on the right.

Huge trees covered in vibrant green moss near the end of the Four Mile Trail.

With Beat gone, I found myself another climbing partner: Dillon from Alaska. We headed up a 4 pitch 5.11c sport route named The Great Escape. Unfortunately, I got spooked on a difficult section on the first pitch, but Dillon took over and lead the whole thing like a champ. Just as we rapped down, it started to rain. Perfect timing! 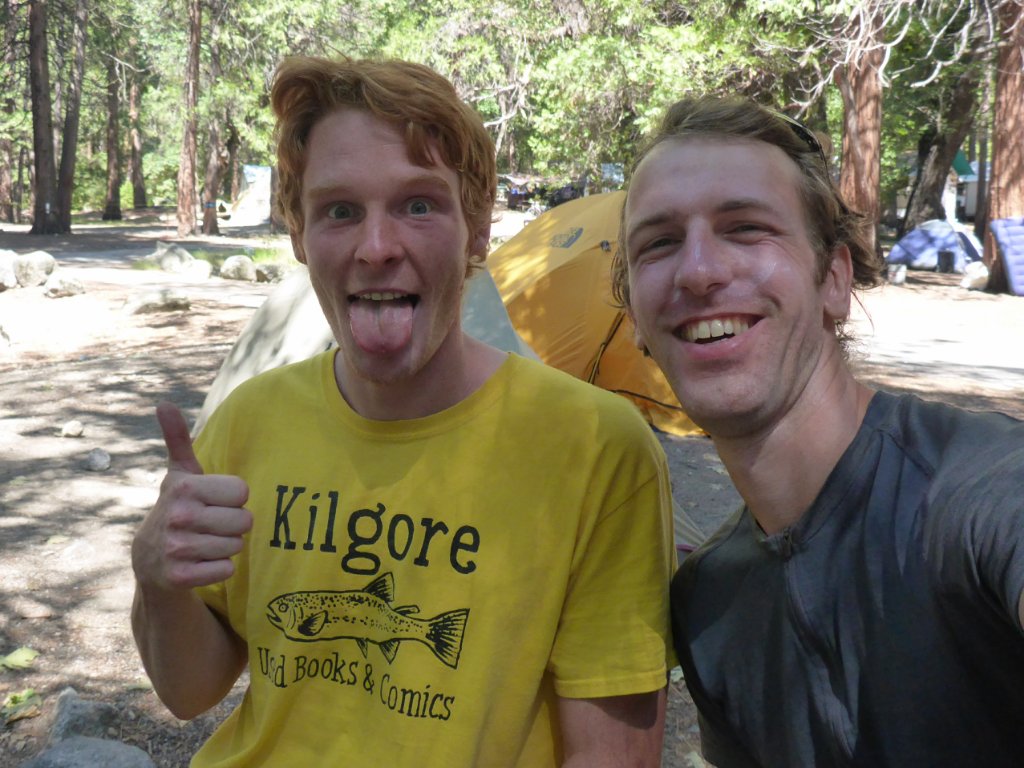 Dillon and me in camp.

The next day was once again super rainy. Lucky for me though, someone had left a coupon for showers on the notice board at Camp 4. I hadn’t taken a proper shower for 8 days, so that was a very pleasant discovery. I basically spend all day showering and doing laundry. No one seemed fazed by a half naked guy in a t-rex and unicorn spandex waiting for the dryer to finish its cycle :). Arkady, a CS engineer, and Isaac, a soon-in-a-couple-of-years to be doctor, who were at the same camping spot as me, made for two awesome dinner companions in the evening.