In order to save myself hours and hours of work typing up tons of blog posts, I’m covering a ton of days in this post. No worries though, there’s still more than enough pretty pictures.

We arrived in Zion the evening of June 28th (day 117) and finding a campsite was an adventure in and of itself. All campgrounds in the park were full and driving over 25km out of it, through various small villages, we couldn’t find any vacancies anywhere. We figured we would probably have to drive back all the way to the other end of the park (over an hour of driving, in the dark). We drove into one of the park’s campgrounds hoping to convince someone to share a site with us for the night, and bam, there it was: a free spot! We had found our sleeping place for the next 3 days :). 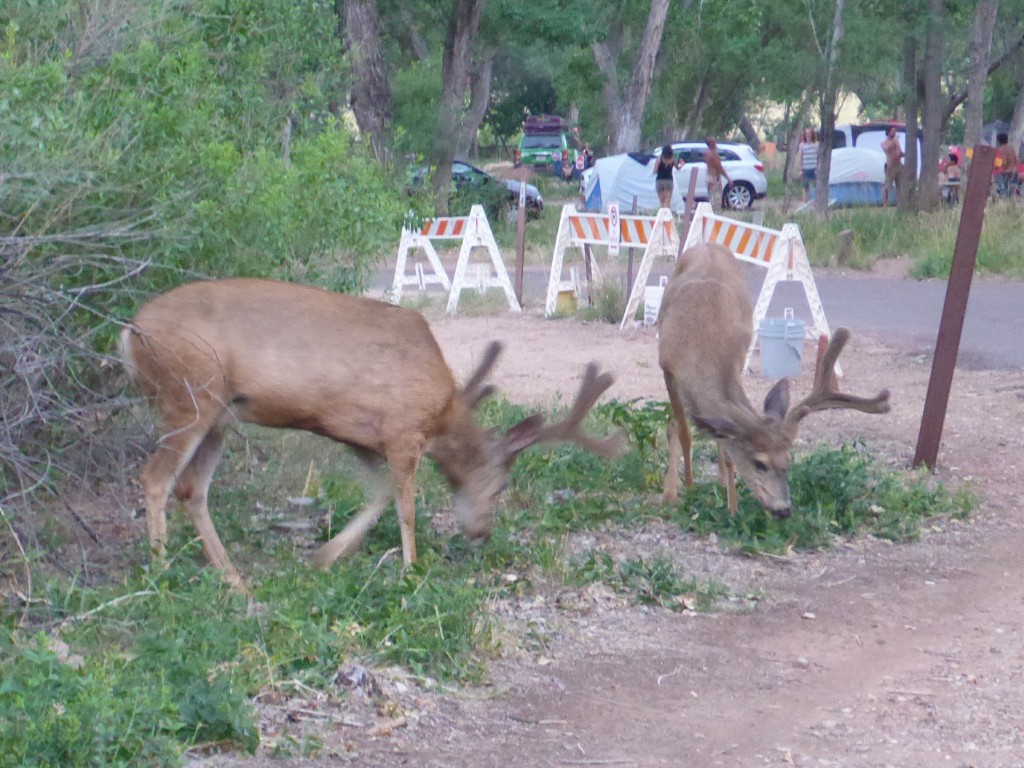 Deer showed up at our campsite every evening!

The next day we hiked into the Narrows, one of Zion’s three famous hikes. This one takes you into a slot canyon, and the vast majority of the time you’re hiking through a river, which is really cool. Eventually, we came to an intersection and decided to check out the smaller “side” canyon (Orderville Canyon). Best idea ever! It was way nicer than the “main” canyon, filled with flowers and trees. There were deep pools, small waterfalls and huge boulders, so getting through this canyon required a bit more than simply walking through water. Really fun stuff! We turned around after climbing up a rope up a 3m waterfall and jumping back down. Awesome day! 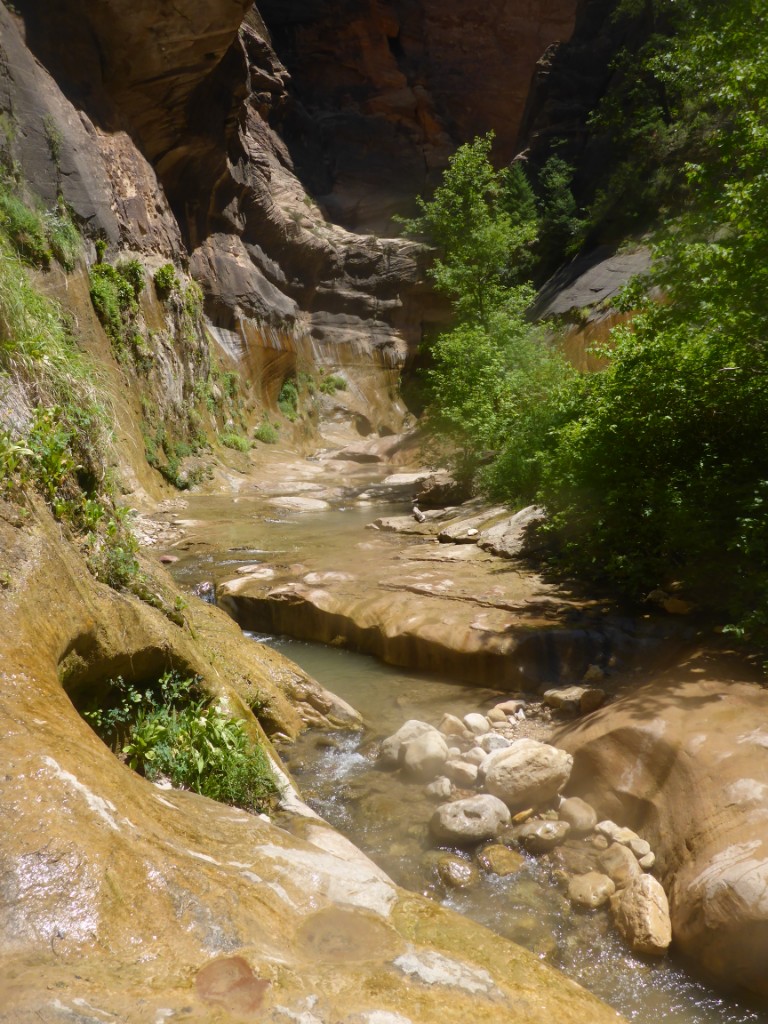 Hiking through Orderville Canyon. The picture really doesn't do it justice at all, guess you'll have to go check it out yourself.

A dragonfly somewhere in the Narrows.

We woke early the next morning, hoping to beat the heat while hiking up Angel’s Landing, another famous Zion hike that takes you up a super steep 300m monolith with overlooks the valley. The view from the top was really great! In order to get there, you have to clamber up a path that at times is only 50cm wide, with a 300m steep drop on both sides. Not for those who are afraid of heights :).

A view over the Zion valley from the top of Angel's Landing.

A 300m drop right behind our heads. There's a long bus somewhere down there for scale :).

Our last morning in Zion, we did a short hike to the Upper and Lower Emerald Pools. These were pretty nice, but not nearly as spectacular as the two other hikes we did.

Very cute, but oh so annoying. Always trying to get your food. 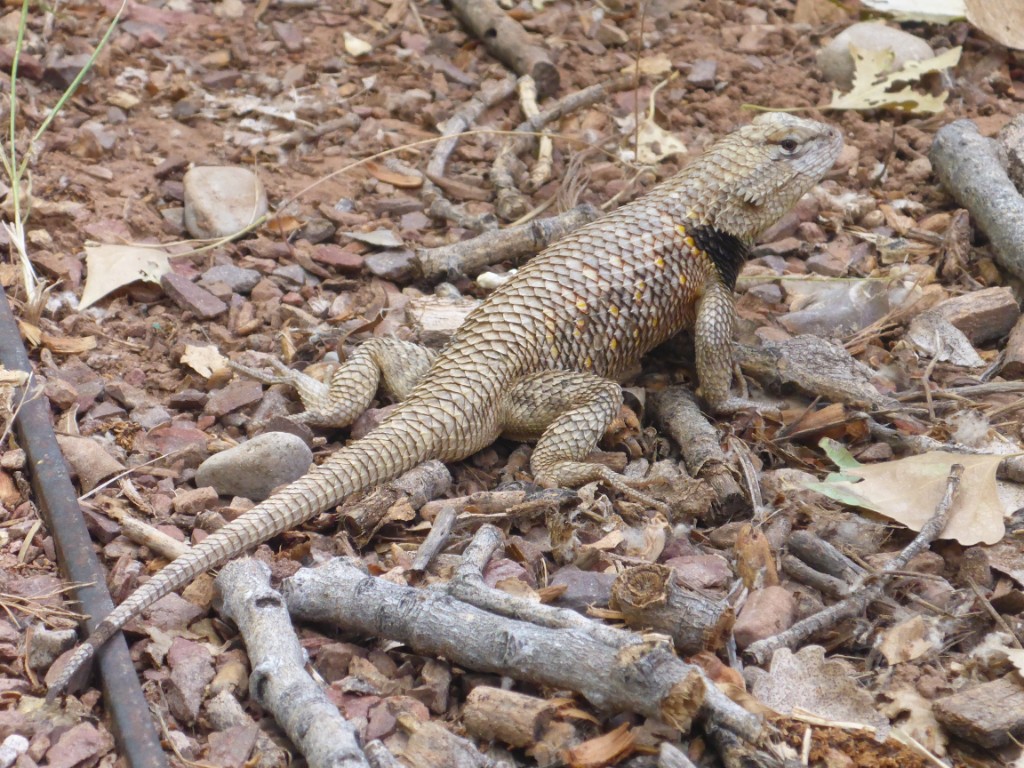 In the afternoon, we drove to Las Vegas and spend the night there on the 36th floor of the Signature hotel. The city and it’s casinos couldn’t really charm us, but we did have an amazing dinner though.

OK, it was pretty warm in Vegas, but not that warm :p.

We decided to skip Death Valley and headed straight for Yosemite. The drive is really long though, so we only made it to the east side of the park by nightfall. Driving to a campsite in the park would have taken at least another hour, so we spend one night at a site in Inyo National Forest instead, right before the Yosemite entrance. 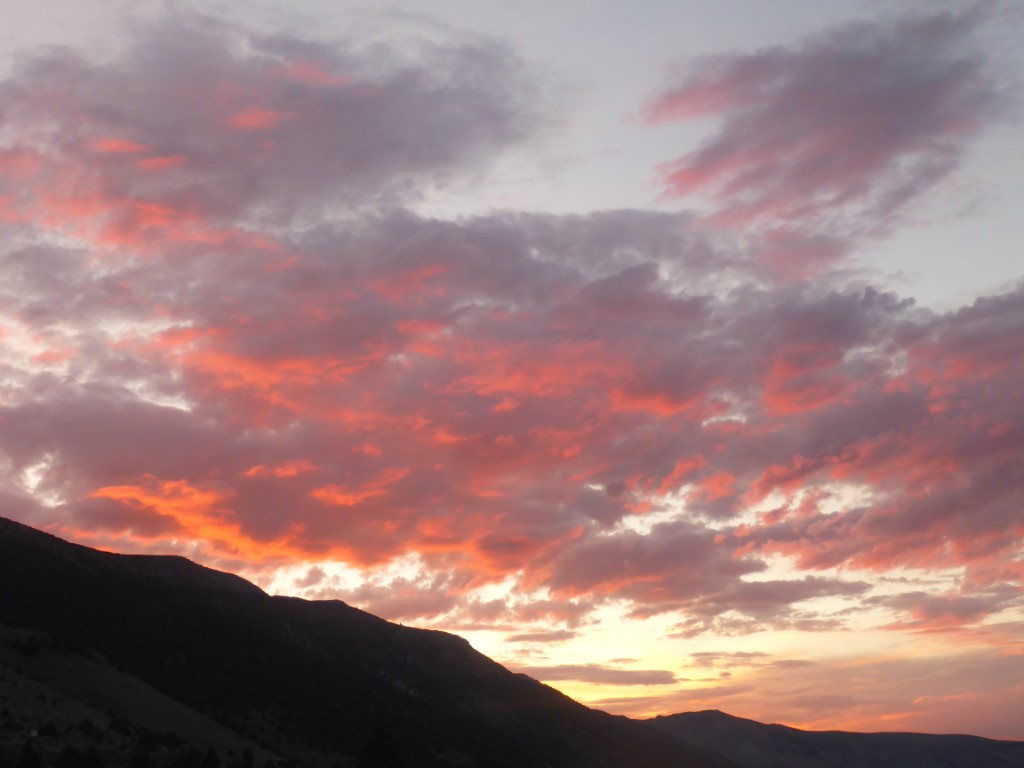 Day 122 (June 30th) we headed into Yosemite and dropped of a small food resupply for my JMT hike at the Tuolumne wilderness center. We both saw our first wild bear while hiking out of the Tuolumne Grove where we went to see the giant sequoias! He was pretty far away though, so no cool pictures.

Pretty flowers with Tuolumne mountains in the background. 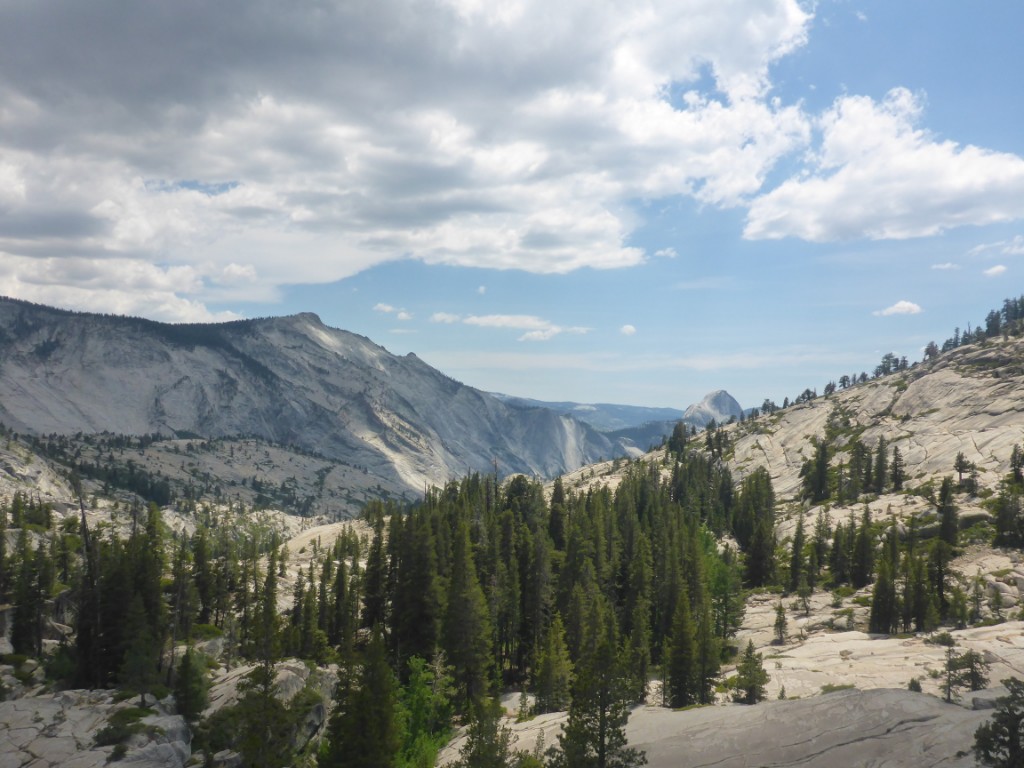 Not sure which mountain this is, somewhere in Tuolumne.

The hole in the giant sequoia is big enough to drive a car through. Veronique for scale :).

In the evening we had a little BBQ at an Upper Pines campground we shared with a French couple. We woke early next morning and hiked up the Mist trail, first to Vernal Falls, then continuing on to Nevada Falls. Both were really nice, especially the view from the top with the roaring Nevada Falls in the background.

Vernal Falls spraying water all over the Mist trail.

Blue Jay on the way up the Mist trail.

Huge family of squirrels eating (there were eight running around in total).

Miraculously we managed to get a spot in Camp 4 for the night and had another BBQ and shared some food with an Indian family we were sharing the site with.

Obligatory shot of El Cap & Half Dome from Tunnel View.

On July 2nd, we once again had a long drive ahead of us, all the way from Yosemite to Bodega Bay, along the coast about 150km north of San Francisco. When we arrived there in the evening, we were lucky to find someone had canceled their campground reservation, so we got to take the only unreserved site :).

After a nice walk along the beach in the morning, we headed east, into Sonoma County, famous for its many vineyards. We visited a couple of them and Veronique had a lot of fun doing wine tastings :). 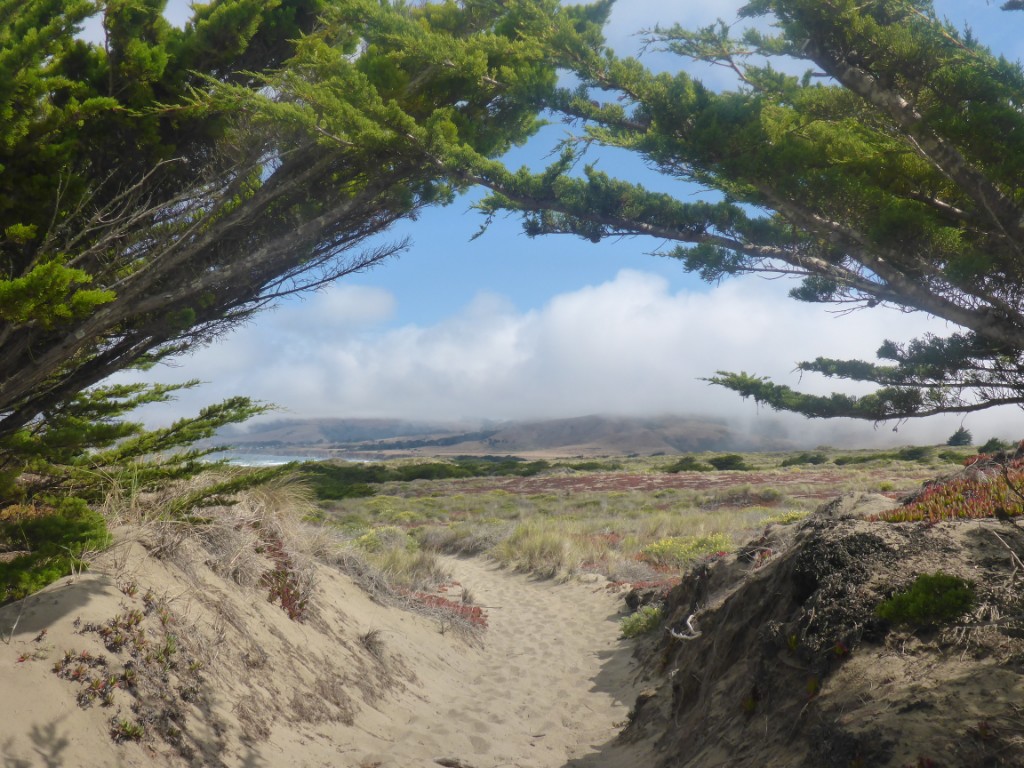 We did have one problem though: it was almost evening and we still didn’t have a place to sleep. Enter “Big Bob”, a 66 year old biker, and his girlfriend Joelle. They accepted our couchsurfing request within minutes and invited us to a festival that same evening. We had a great time there, a great cover band was playing, the food was great, and the fireworks was pretty crazy. The excerpts of political speeches that were played right before the fireworks were rather “uncomfortable”/creepy though, especially given that many of the played sentences were completely out of context. 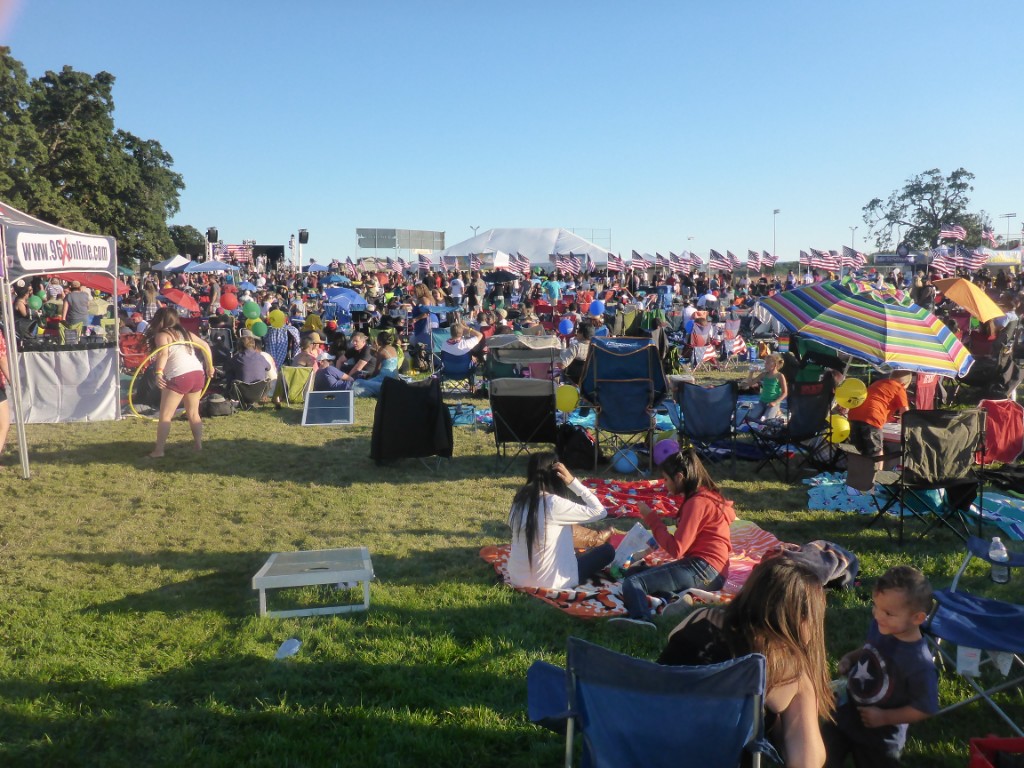 Kaboom festival in Windsor, everyone brings chairs, food, knives, whatever.

After a great night’s sleep at Bob’s and saying goodbye to his labrador Moka, we drove south to San Francisco, were we had booked an AirBnB room in Outer Mission for the night of July 4th. We spend the day wandering around the city and having some amazing sushi in the evening. Btw, 6th Street is weird, as soon as you head down there, it feels as if you’re in a different, not very nice, world. So, head down 5th or 7th instead ;).

We ended our stay in SF with an amazing breakfast at the Higher Grounds Coffee House near Glen Park and then drove towards LA, since Veronique had a plane to catch the next day. We made it to Santa Barbara and spend the night at a campgrounds in the middle of the coastal mountains.

Lots of wild turkeys at our last campground.

The 6th of July, I dropped Veronique of at LAX. It is apparently also pretty impressive that we saw Kanye West there. I figured it was the guy in the nice suit next to him that was famous, but no :p. Anyways, the goodbye wasn’t so hard this time, we had an amazing time and I’ll be back in Belgium in only a couple of weeks.

Because I wanted to start my JMT hike around July 10th, I needed to be in Yosemite by the evening of the 8th, due to having to get a permit. I had also arranged to meet a friend, Elke, for lunch in SF, so there was no time to waste. I headed straight back the way we had come and managed to get to Manteca, about 2 hours away from SF. Since it was really late already, I decided to simply sleep in my car on a Denny’s parking lot (they are open 24/7, so a pretty good place to park in a case like this).

The next day, I did a blitz visit to SF and had a super delicious South African lunch with Elke. It was really cool catching up, but she had to get back to work and I had some last minute shopping to do for my JMT hike, so less than 2 hours later I was already back out of SF. I spend the afternoon shopping and driving to Yosemite, where I arrived around 11PM. I drove into the first campgrounds, Hodgdon Meadows, and the very first person I talked to offered to share his campsite for free, I didn’t even explicitly have to ask :).

The next morning, I was up early and basically spend the whole day on the Valley general store parking lot preparing for my JMT hike: getting my bear canister, making a pot stand (didn’t want to spend each evening looking for nicely sized rocks to put my pot on as I had been doing for the past weeks), organizing clothes, making toilet paper bags with powdered bleach and Ziplock freezer bags (you have to hike everything out, no burying it, it doesn’t decompose high up in the mountains), …

Around midnight, I grabbed my camping chair and set it up in front of the wilderness office. The permits for the next day are only given out at 11AM, but there are only limited amount and I wanted to make absolutely sure I would get one. About 2 minutes later, a ranger walked by and asked me if I was going to sleep there. I told him of course not, they can’t sent you away if you are awake :). He was pretty cool about it and told me I wouldn’t get into trouble as long as I didn’t lay down on the ground.

It wasn’t until 5:30AM before the next people in line showed up, but better safe than sorry, I guess. We killed the time telling stories about previous hikes and climbs, and even saw a bobcat walking around! Around 11:30AM I finally got my permit to hike from Happy Isles in the Valley to Tuolumne. In previous years, it was possible to get a walk-in permit for the JMT for the Valley, but they overhauled the system last February, so now you have to get this permit and then get another permit in Tuolumne, losing a day in the process. Oh well…

The rest of the day, I did some more preparations, ate a huge pizza and finally, when the sun had already set, I set up my tarp and bivy in the backpackers campground, ready for my 360 km hike which would start the next morning!