June 10th, the day I would finally start my hike of the John Muir trail! I’d been looking forward to this for quite a while, it was actually thing that got this whole “travel around the world” plan going.

In case you’re not familiar with the JMT, it’s a 340 km hike from Happy Isles in Yosemite Valley in the north to the top of Mt Whitney in the south, the highest point in the continental US (4421 meters high). Actually, the JMT is not 340 km, it’s longer. For starters, the official length doesn’t take into account that the trail goes up and down, a lot. And then you also have to somehow get down from the top of Mt Whitney. Let’s just say it’s 360 km minimum, probably a bit more. You can also go the other way of course, but most people go southbound because it gives your body time to acclimatize to the altitude, even though it’s harder than doing the trek northbound, because you gain more altitude the further south you get.

The majority of the JMT runs together with the PCT (Pacific Crest trail, 4200 km from the border with Mexico to the border with Canada), and it’s said to be one of the most beautiful stretches of it, going straight through the High Sierra. It’s also one of the hardest, because you constantly have to go over 3000+ meter high mountain passes. Basically, you are in the middle of nowhere, up in the mountains for the whole trail.

So, now you now what it’s all about.

The four months before I left on my trip, I spend all of my time researching, buying and making gear for this very hike. Ruan, a friend from KU Leuven, brought me back the world’s lightest backpack from the US, I spend about 70 hours sewing a custom sleeping bag, made trekking poles lighter than anything available commerially, then decided to buy some trekking poles anyway because mine weren’t adjustable in size, etc. I hope that gets the picture across about how much energy I was putting into this and how much I was looking forward to it :). Oh, and if you’re interested in all the gear, no worries, I’ll do a gear review post later on.

Anyway, I woke early the 10th and had my oatmeal breakfast while hiking from Yosemite’s backpackers campground to the trailhead. Why sit down when you can walk, right? Some quick last minute fixes to my gear and by 7:40AM I was off. The section between Happy Isles and Tuolumne, where I had to get another permit to continue the hike, is 40 kilometers. I had brought food for two days, so in the worst case, I would be able take two and a half days for this section. 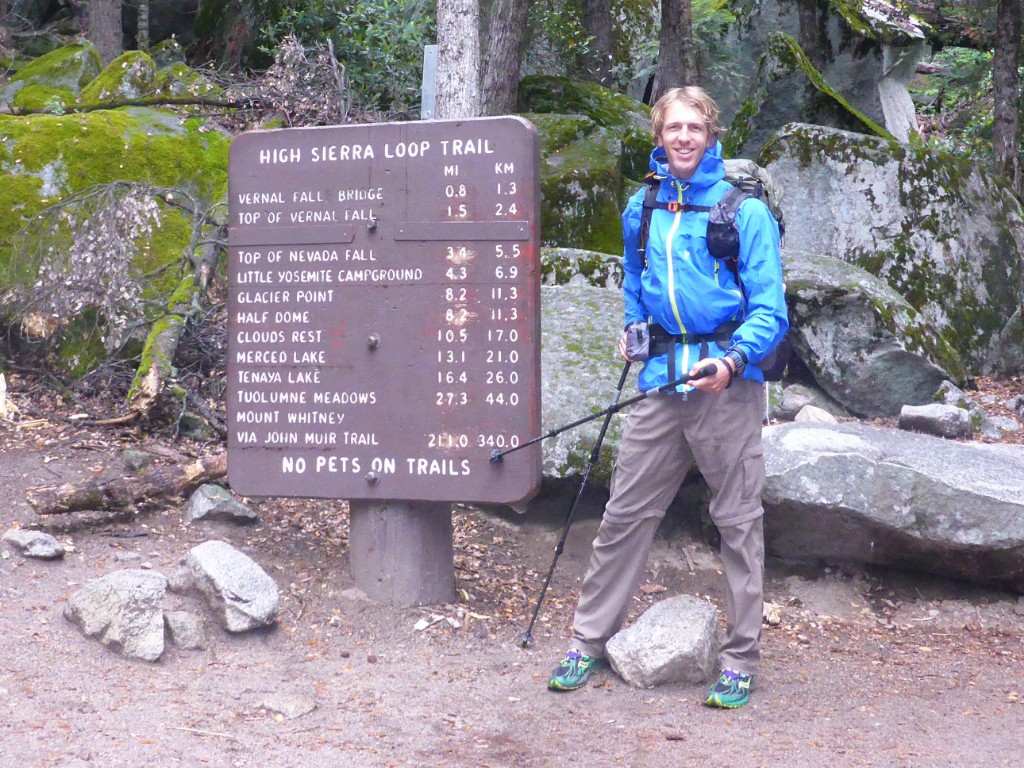 At the trailhead, only 340 more kilometers to go!

The first half of those 40 km are supposed to be pretty though, because you gain about 1800 meter (6000 ft) of altitude straight away. However, I was feeling rather fit when I finished the ascent and it was only around noon, so I decided to keep walking. The second 20 km stretch is mostly downhill anyway, how hard could it be, right? 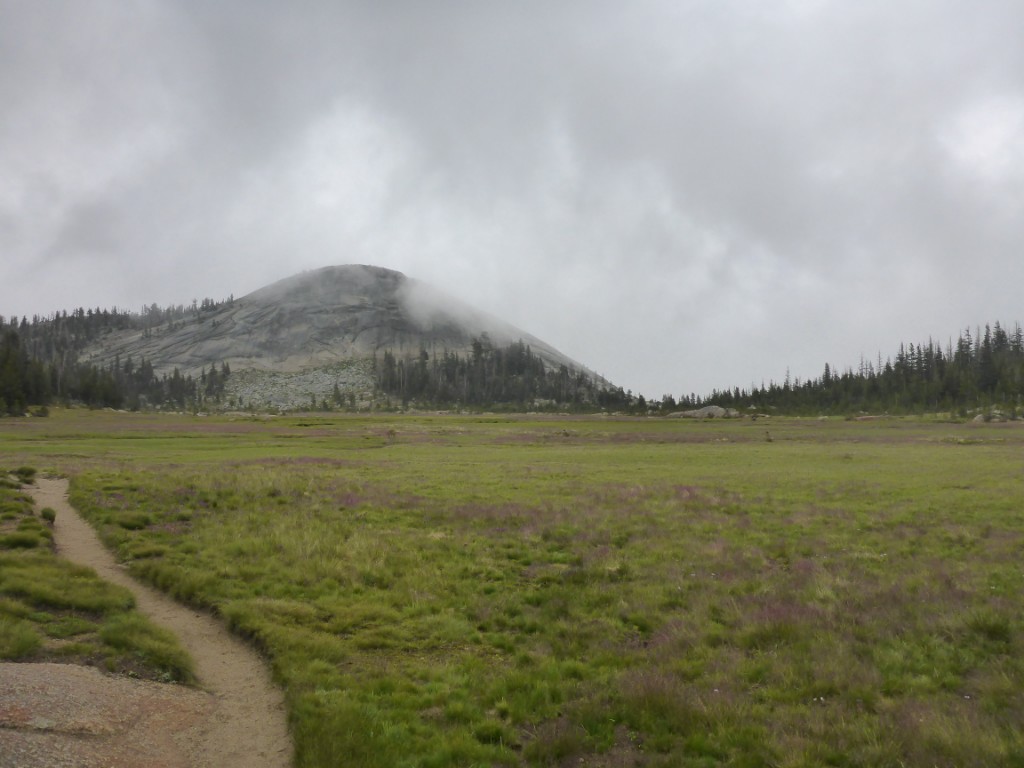 Near Sunrise High Sierra Camp, about 22 km in. 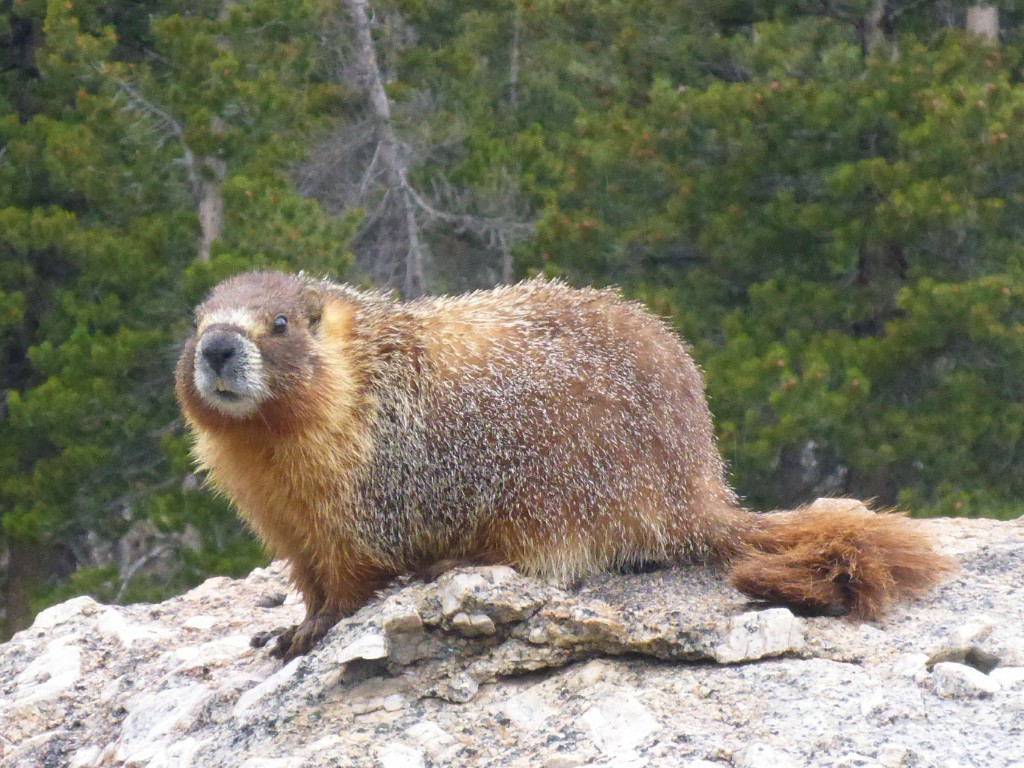 Well, even though there was all the gorgeous scenery to urge me on, I was getting super tired towards the end, because I never hike, and certainly not with a backpack up in the mountains… Still, I figured camping 5-10 km away from Tuolumne would be silly, so I kept going and arrived at my destination a broken man by dusk. Many more marathon days would follow :). 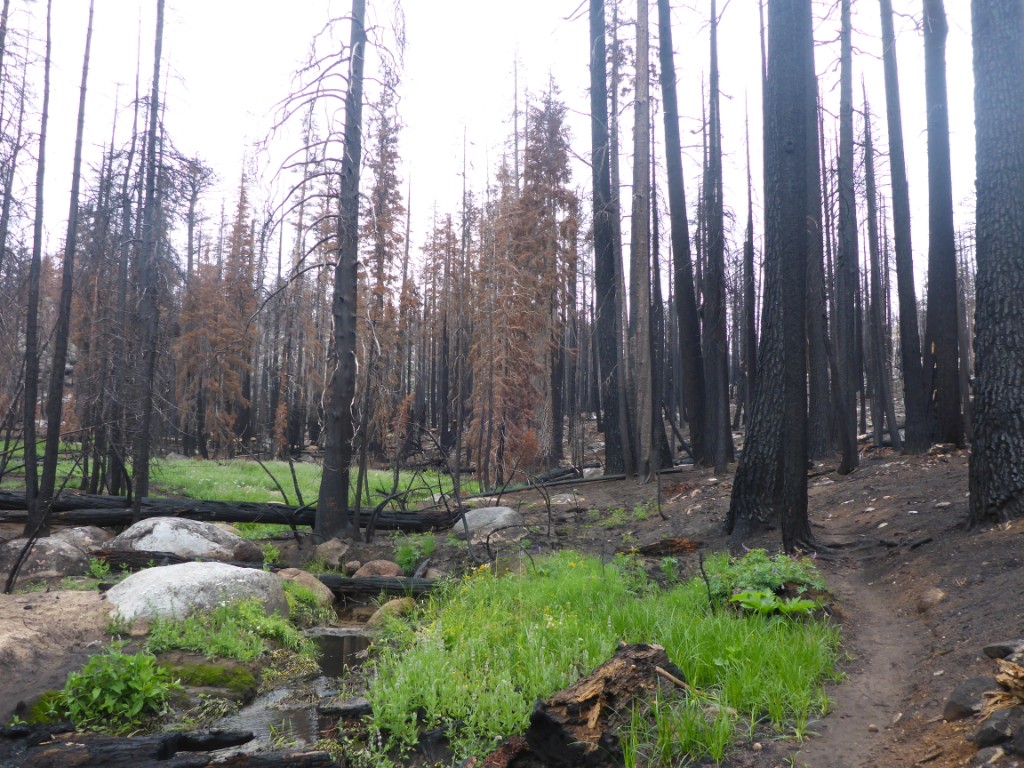 Burned section of the trail out of the Valley.

Somewhere near the burned area, rain rolling in in the background.

The nature along the way was really beautiful. One section of forest burned down last summer and it was really strange walking between all those black stumps. Pretty neat though, just a sight you’d never expect to see. I also came across a couple of new animals along the way: a marmot which was completely unfazed by me standing right next to it, a hummingbird which zipped right past my face ( hummingbird high up in the mountains, so weird), and a ton of trout in the tiny mountain streams.

There are only 10 permits of the kind I needed available per day, so I wanted to be at the wilderness office early and set my alarm to 3:30AM. But because of the rather strenuous 40 km the day before, my body was kind of enjoying the rest and I slept through my alarm. Panic when I woke at 4:36AM! I rushed to the wilderness office one kilometer away as fast as my legs could carry me and arrived fourth in line, literally 30 seconds after the third guy. Still pretty good right?

Turns out the third guy was going to take all remaining permits… Oh, and he wasn’t going to hike himself, was doing this for a company, and the company needed a minimum of 13 permits, even though there was no way they could get more than 10. Needless to say, me and three others who arrived shortly after were not amused. We stuck out the wait though, and when 2 cancellations became available at 10:45 (promptly taken by the first 2 guys in line), he agreed to only take 6 permits and let us have the remainder. Huray!

A shot from somewhere on the Tuolumne campgrounds.

Walk-in permits become valid the day after you get them, so the rest of the day I slept some more and shared beers and stories with the people I had met while queueing, Keirnan & Sarah and Judy & Abby.

Rehydrating food, hmmm :)! No seriously, it was pretty good.

At one point during the day, I was going back to the wilderness office to put some leftover food in a bear box and managed to hitch a ride. The driver, Allen, was a JMT fanatic who was going to try and break the northbound record at the end of July, meaning he needs to finish the whole thing in less than 3 days and 12 hours. He was on his way to Red’s Meadow for a training run, which for him apparently meant hiking/running the 60 km between Red’s and Tuolumne in about 12 hours… Crazy!

My plan was to hike those next 60 kilometers in 3 days, so pretty relaxed. I decided to make my second day of hiking, July 12th (day 134), a very easy one and only hiked about 16 km, to Lyell Fork Bridge, a lake below Donahue Pass. A couple of  hours after I arrived Keirnan & Sarah showed up at the same spot. A little later Danielle & Ryan, a couple I had met somewhere between Happy Isles and Tuolumne, also did. Everyone set up their tent close to mine and we decided to hike together the next day. 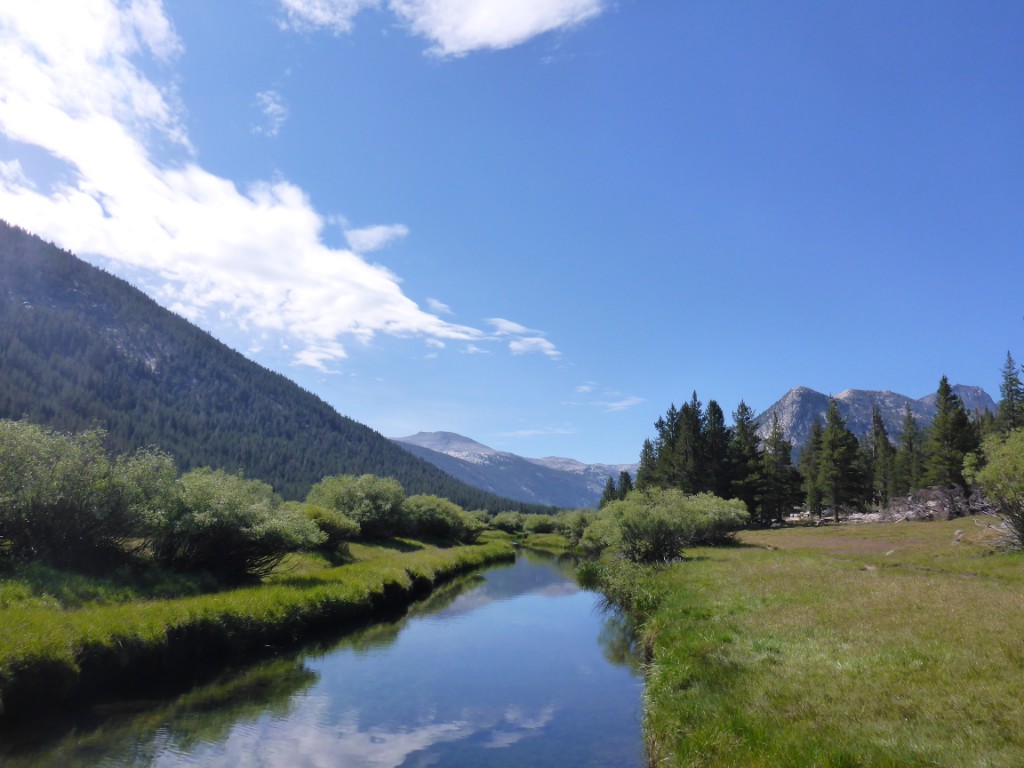 The backdrop for our night of camping at Lyell Fork Bridge.

Tarp and bivy all set up. Only took me about an hour or so :p.

It was both funny and sad when we found out the kind of gear Danielle and Ryan had with them. There’s this important saying that when backpacking “cotton kills”, because it traps moisture and wicks away your body heat. Danielle was wearing 7 layers of cotton… Seven! It was like a miniature wardrobe on the trail. Hahaha :). Oh, and they had so much unnecessary heavy gear with them, for example dry shampoo in a giant spray can. Needless to say we all had a good laugh and gave them a crash course in lightweight backpacking, after which they decided to send a huge amount of stuff back home and shop for a couple of crucial items along the way. 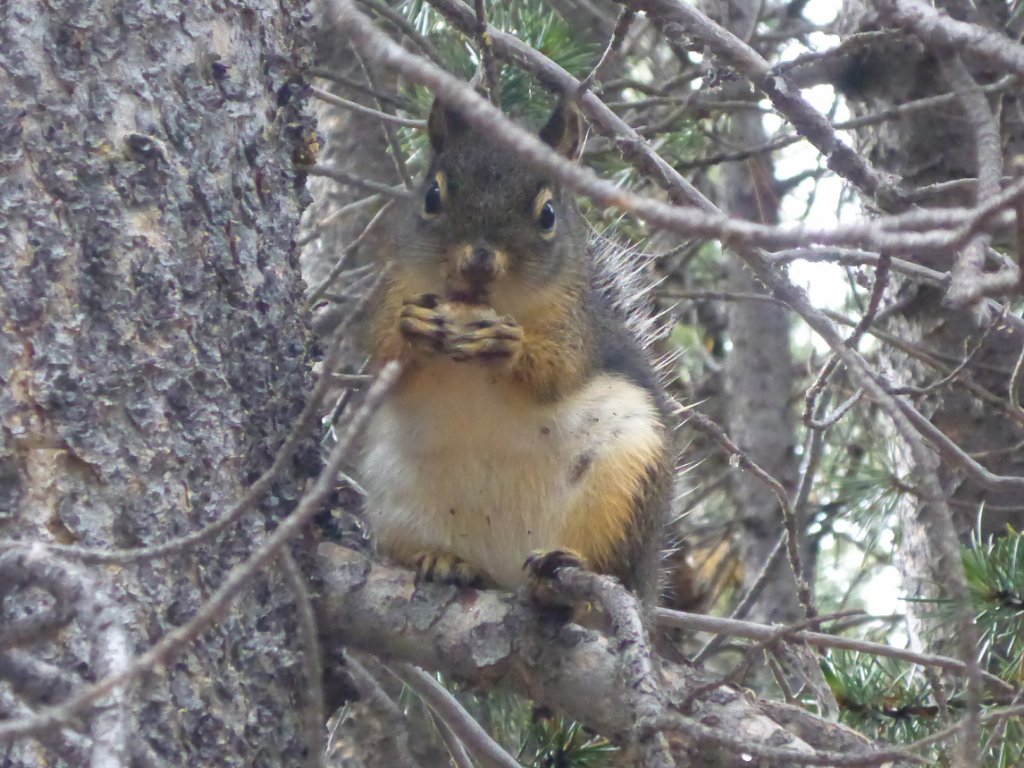 A new kind of squirrel! 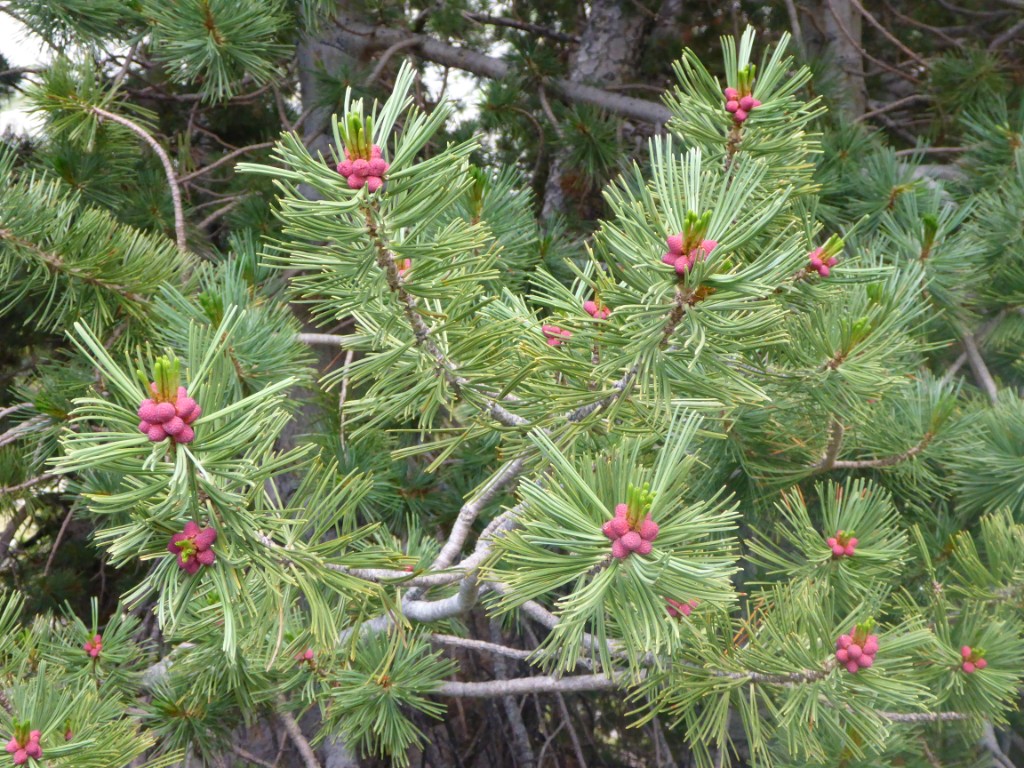 The next morning we set out to cross Donahue Pass, the southern wilderness exit out of Yosemite. Along the way, we saw a ton of marmots and were rewarded at the top of the pass with huge views across the Sierra. And if you stood in just the right spot, there was cell phone reception, great to sent a few quick pictures to those back home.

Sarah, Danielle, Ryan, Keirnan and me at the top of Donahue Pass. 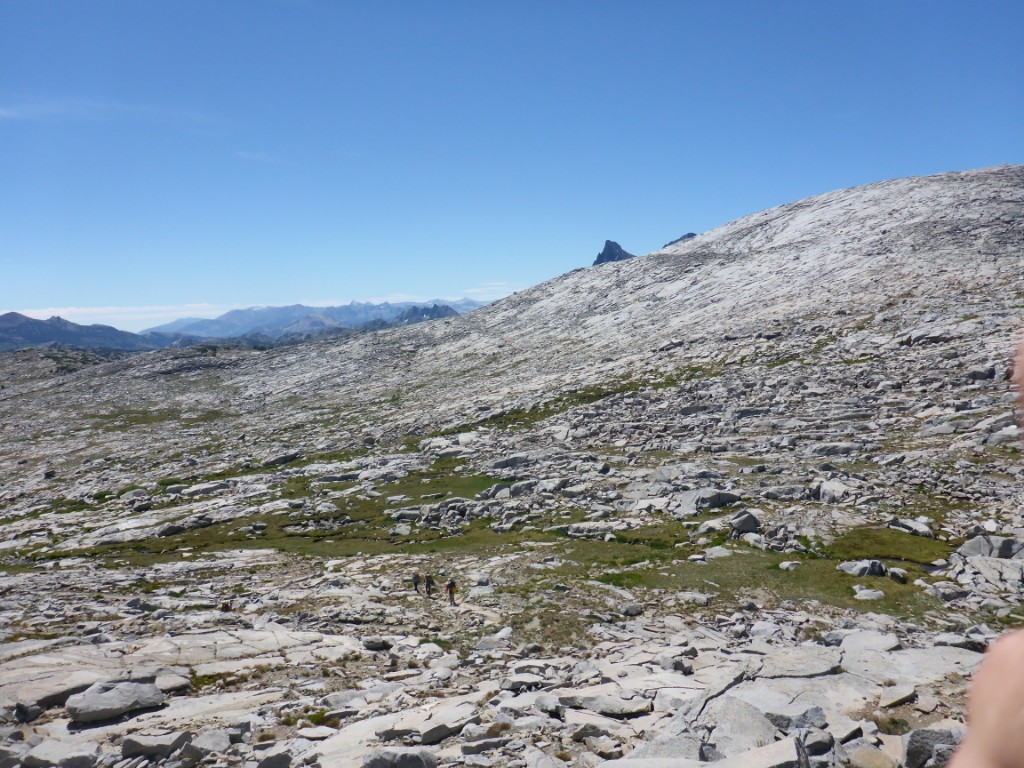 Over Donahue Pass! Tiny people visible somewhere in the picture :).

Because the others had a much more relaxed hiking schedule in mind than me, and because Sarah was having some trouble with the altitude, this was once again an easy day. We set up camp 15 km further, at Thousand Island Lake. A super beautiful area with a big snow covered mountain as the backdrop to a lake dotted with tiny islands. There was quite a bit of wind, so we attempted to all set up our shelters behind a big tree and ended up with a veritable tent complex :). No problems at all with the wind at night though!

The scenery after the 3rd day of hiking: Thousand Island Lake.

Doing some laundry while waiting for the others to arrive at camp.

Because I only had food for three days, I needed to get to Red’s Meadow the next day. After saying goodbye to my hiking buddies of the last two days I set off on the 29 km to Red’s, where I arrived a little past noon. Along the way were a couple of really beautiful lakes, such as Garnet Lake and Shadow Lake. 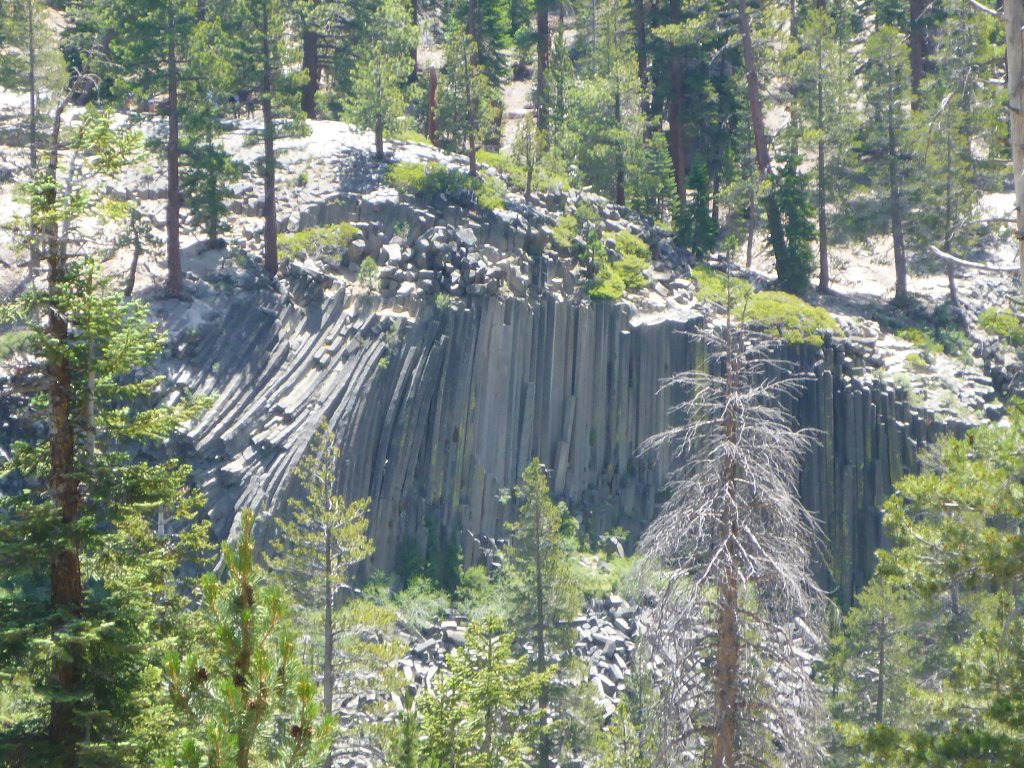 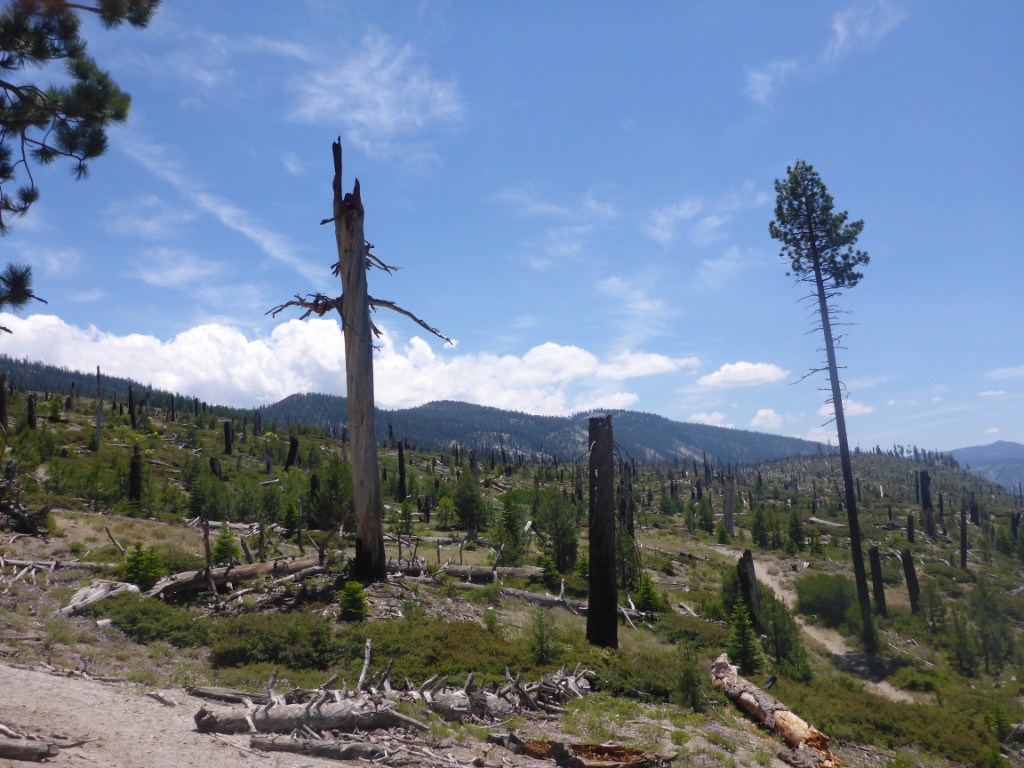 Must have been quite the storm here: almost all trees are down right near Red's. 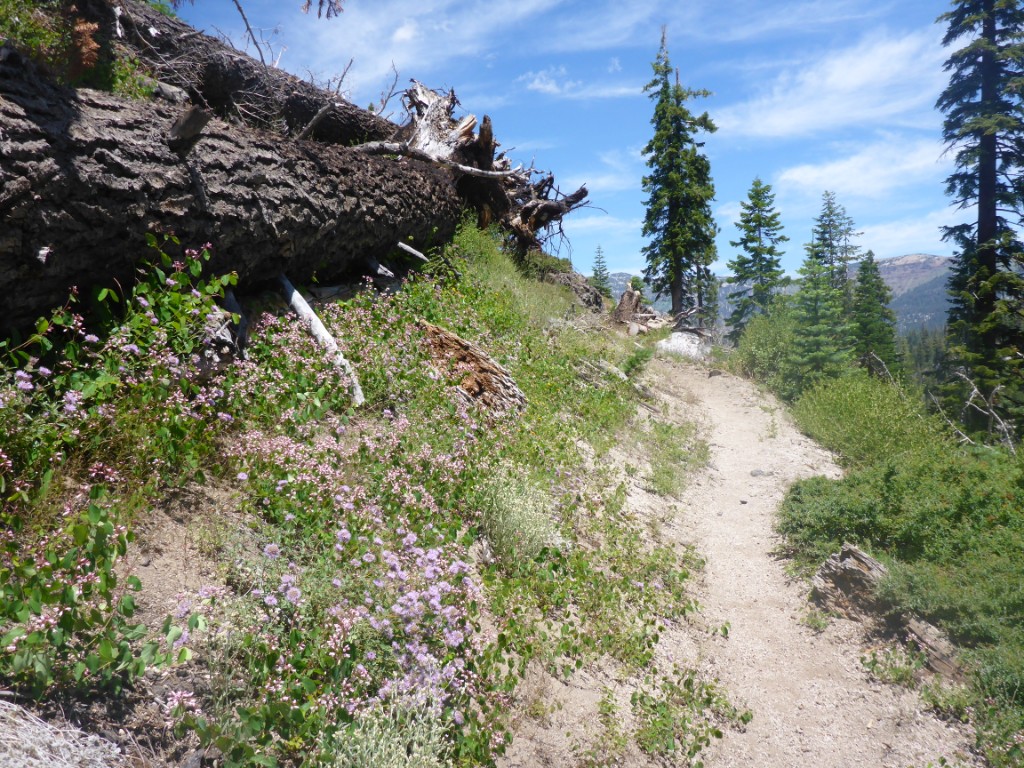 Lots of flowers in bloom near Devil's Postpile.

I also re-encountered Chase, a guy I’d first met on the way out Yosemite Valley and who had camped with us near Donahue. Unfortunately for him, he didn’t have hiking poles and had stressed his knees too much which sadly meant an early end to his JMT hike. He was limping down the trail to the nearest exit, where he would take a bus. 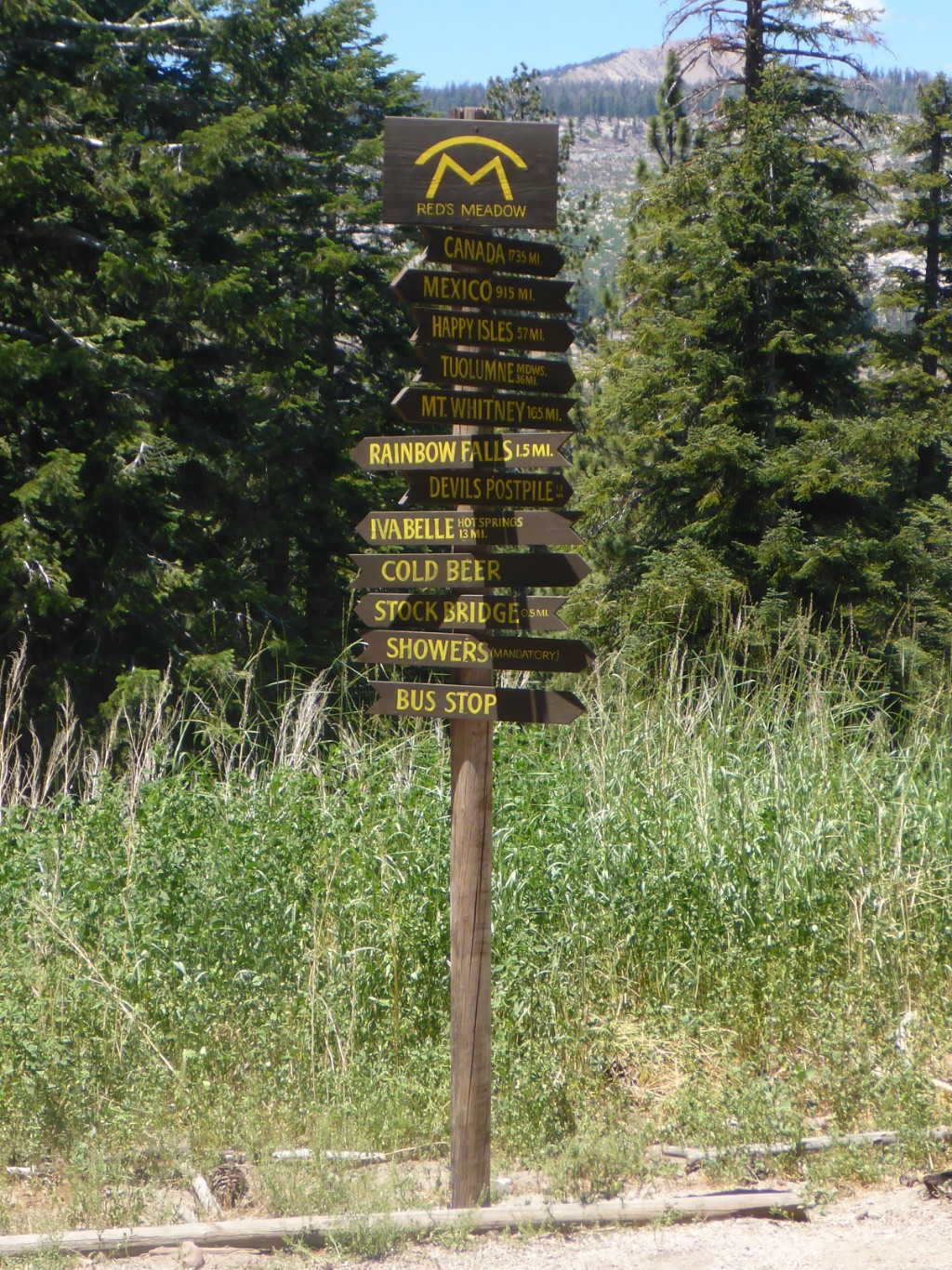 Once at Red’s, I picked up my resupply: four days worth of food to get me to Muir Trail Ranch (MTR), 80 km further south. Just as I arrived there, so did Chase (by bus) and he gave me a ticket so I could pick up his resupply at MTR. Silver lining :).

Now, whenever people resupply, it turns out they sent themselves way too much food. Or enough food, but it won’t fit in the bear cannister. See, you need a bear cannister when wilderness camping along the JMT. Basically, it’s a big cilinder that bears can’t get into. You have to put all scented items inside of this thing, which means not just food, but thrash, toiletries, medicine (because some pills have a coating of sugar and bears like that stuff), … It’s a big pain in the ass, takes up a huge amount of space in your pack, and really limits how much food you can take with you. But unfortunately that’s the way it is…

Anyway, because of this, there’s always a ton of food left over at resupply points and this gets put in the “hiker’s box”. So, the rest of the afternoon, I joined the other hikers into gorging myself on other people’s leftover food. There was also beers and chips being passed around, everyone was having a great time.

And guess who showed up as well? Allen! His practice run a couple days earlier had been a success and now he was doing another one, this time from Red’s all the way to Happy Isles, 100 km across mountain passes and up and down hills in about 18 hours, in the dark! 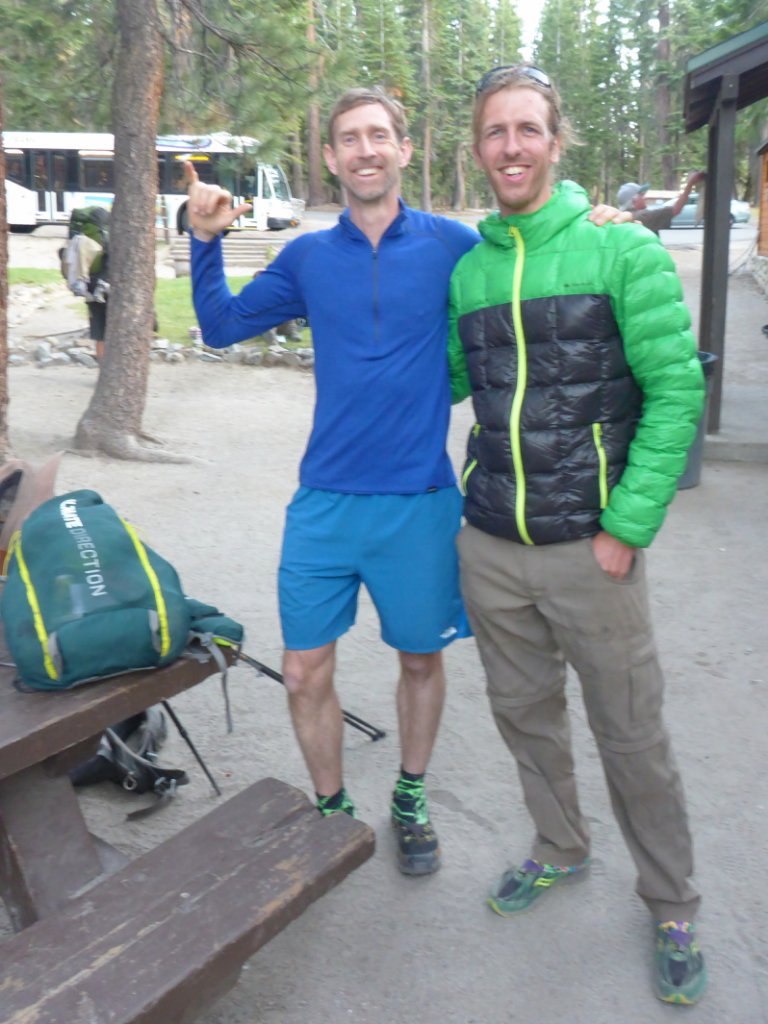 Allen ready to go for another 100 km nightly through the mountains "training" run. Haha, crazy bastard :)!

I decided not to hike anymore that day and we got a campfire going at Red’s campground and afterwards all put our weary heads and bodies to rest for the night.